Valley of the gods

Entwines Navajo lore with a reclusive trillionaire and his would-be biographer, creating a fascinating, mysterious and idiosyncratic vision of America.

The film weaves together three narrative threads: Navajo archaic legend about gods locked inside the rocks of the Valley of the Gods; a story of the wealthiest person on earth, Wes Tauros (John Malkovich), who lives hidden away from the world suffering from a personal tragedy; and that of the narrator, John Ecas (Josh Hartnett), who works as a copywriter at Tauros’s company.

After a traumatic split from his wife, John starts writing his boss’s biography and accepts an invitation to his mansion. At this time Tauros’s company, which mines uranium ore, buys the Valley of the Gods to bore tunnels through the sacred land. The shattered peace of Navajo ancestors makes the rocks give birth to an avenger.

“A large-scale drama with a grand visual sweep. There are things in it that I will remember long after most of the more conventional movies of late have faded away. Wonderfully unrestrained and seemingly foolhardy cinematic vision.”
Peter Sobczynski, for Roger Ebert

“A real standout for the year! Valley of the Gods is a rare and beautiful film to watch. It’s a must-see and a must-think. Watching it made my soul hurt and heal. Director Lech Majewski’s deft direction offers a spectacular sci-fi-ish story of what real power really means.”
Scott Hayes, St. Albert Gazette

“Valley of the Gods is an exploration of love, wealth, faith, loneliness, and consumerism told primarily through the lens of Navajo legends. The end result is something fantastical and wondrous. Majewski has a vision. He manages to capture the majesty of nature with incredible reverence and the grotesque absurdity of opulence in equal measure. Most importantly, the bulk of Valley is told from the perspective of the Navajo, highlighting the real violations of the American government and global consumerism on the people who live within America’s borders. Valley of the Gods is the kind of film you’ll root for.”
Douglas Davidson, Elements of Madness

“The film is an absolute delight for the eyes, as the gorgeous desert cinematography and lush production design transfixes you from the first frame.”
Dillon Gonzales, Geek Vibe Nation

“Valley of the Gods is a fascinating, mysterious and idiosyncratic vision of America.”
Blu-ray.com

“Brilliant visuals. The Navajo mythology, which is an intricate narrative, to begin with, is depicted in a complex, mystical way. Josh Hartnett really pours himself into the role of a divorced writer who has taken a decision to embrace the absurd things in life. He feels almost like he’s been ripped out of the pages of an Albert Camus story.”
Remus Noronha, Meaw

“Just take a look at Valley of the Gods. Majewski’s knack for visual storytelling is top-notch.”
Jim Alexander, Reel Talker

“Gods is often an overwhelming visual treat. Featuring vast desert landscapes and daunting palacial rooms, the film’s images force the viewer to feel small, as if they are pawns to some otherworldly game of chess. Intentionally linking Taurus’ mansion to Citizen Kane’s Xanadu, there is a cinematic opulence to this trillionaire’s estate unlike anything we’ve seen onscreen in ages. From tennis courts that resemble the Sistine Chapel to operas performed standing in an enormous fountain, every shot within its walls speaks to the incredible power (and loneliness) of vast wealth and creates a gut-wrenching fear towards its enigmatic owner. Meanwhile, this life of remarkable luxury is held in direct contrast to the awe-inspiring natural world of the Navajo community. Although just as daunting as cool isolation of Taurus’ world, the dry heat of the desert carries an intensely spiritual warmth to the landscapes and carry a deep connection to those that hold them in reverence. As a result, the nervousness that one feels in these scenes is not for a man who lives in a castle but rather for the mysterious power of nature that is rarely taken seriously by outsiders. Engulfing the viewer with the sheer magnitude of their surroundings, Majewski shifts their perspective away from themselves and towards something greater. Because, to him, recognizing that there is something greater helps remind us that we are something less.”
Steve Norton, Screen Fish

“Valley of the Gods has similar themes to 2001: A Space Odyssey. In fact, the final act has a surprising scene that made me think that that’s what it would be like if the “Starchild” from 2001 landed on Earth and obliterated cities. (…) I am familiar with writer-director Lech Majewski’s The Mill and the Cross. I saw that film years ago and it was a visual feast. His latest film is no different. I just couldn’t shake on how unique the film is. It stayed with me. Valley of the Gods was awesome and is recommended!”
Gerard Iribe, Why So Blu

“It must be a dream movie of a great movie fanatic, and it’s definitely Lech Majewski. He turned the Valley of the Gods into an extraordinary and unforgettable film.”
Beri Shalmashi, Filmkrant 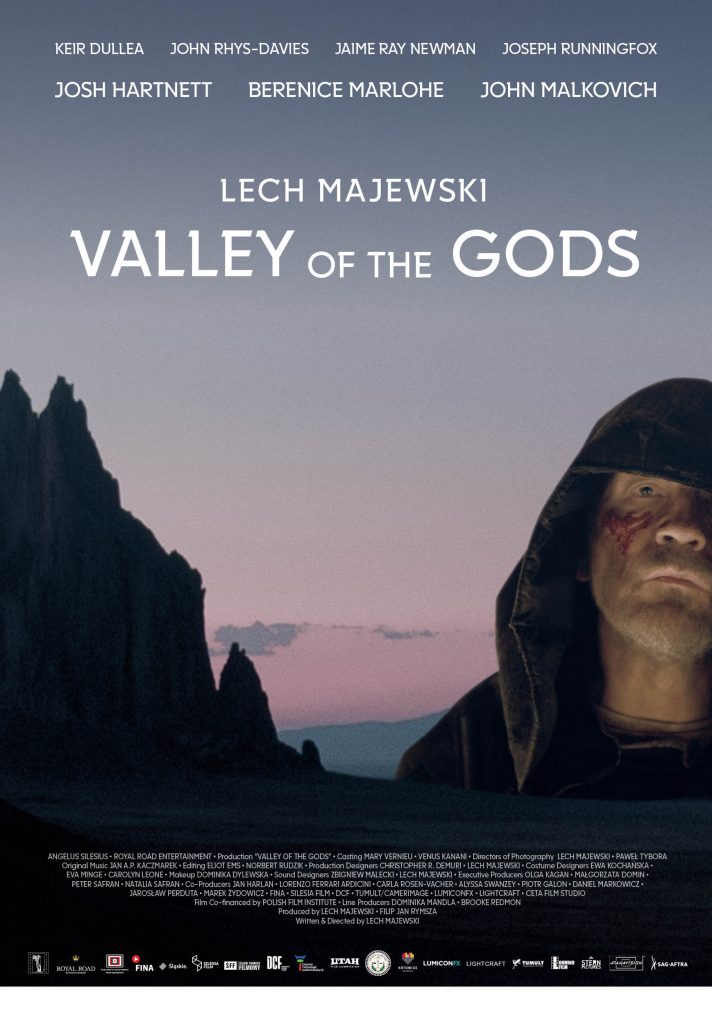