A sumptuously shot filmic exploration of loss and spiritual redemption. It is set in 2010, an “apocalyptic year” for Poland, marred with freezing winter, spring floods and the plane crash taking life of president Lech Kaczynski, along with many others, and toppled with the eruption of the Icelandic volcano that paralyzed air traffic in the whole world. The context of national tragedy is mirrored in the personal tragedy of loss being experienced by a young literature professor, who enters into a dark and hallucinatory journey, ultimately toward a rediscovery of light and meaning. The only help he can find comes from his reading of Dante’s Divine Comedy.

“The best film adaptation of Dante’s Divine Comedy in the history of cinema. A masterpiece!”
Corriere della Sera

“In Polish poet and filmmaker Lech Majewski’s Onirica /Field of Dogs, the visuals are again striking and the theme of death deeply examined in an original way. Again there is a strong feeling that the stakes are high – a dialogue with God, a struggle for the soul.”
Deborah Young, Hollywood Reporter

“Give up traditional thinking, you who watch this movie. Lech Majewski not only makes a film, but also offers intellectual, artistic and cognitive challenge. He invites the viewer to travel through the world of images from our visual heritage. His vision moves and shakes our imaginations. We watch a movie that becomes our movie.”
Rolling Stone Magazine

“Lech Majewski’s Onirica / Field of Dogs stands not only as a dedicated homage to directors such as Andrei Tarkovsky and Terrence Malick, but as a representation that the art-house genre is not dead, but just getting started. The notable markings of this film are the serene scenes of transcendent beauty and religious allegory that will leave you discussing the film for days on end. Few films have been able to live up to the stylistic shift in cinematography that came with Terrence Malick’s 2011 film The Tree of Life, but Onirica / Field of Dogs matches it with unrivalled cinematic beauty: truly rare to come by. If anybody ever has the opportunity to encounter a film such as this, jump into it without hesitation.”
Beau Bridge, RADIO CANADA 1

“Majewski is not afraid to tackle the big themes of life and death with bold visual ambition and deep commitment, bringing to film not only his own sense of humanity, but also a very personal rendering of the spirituality of the Polish psyche.”
Richard Ashrowan, Alchemy 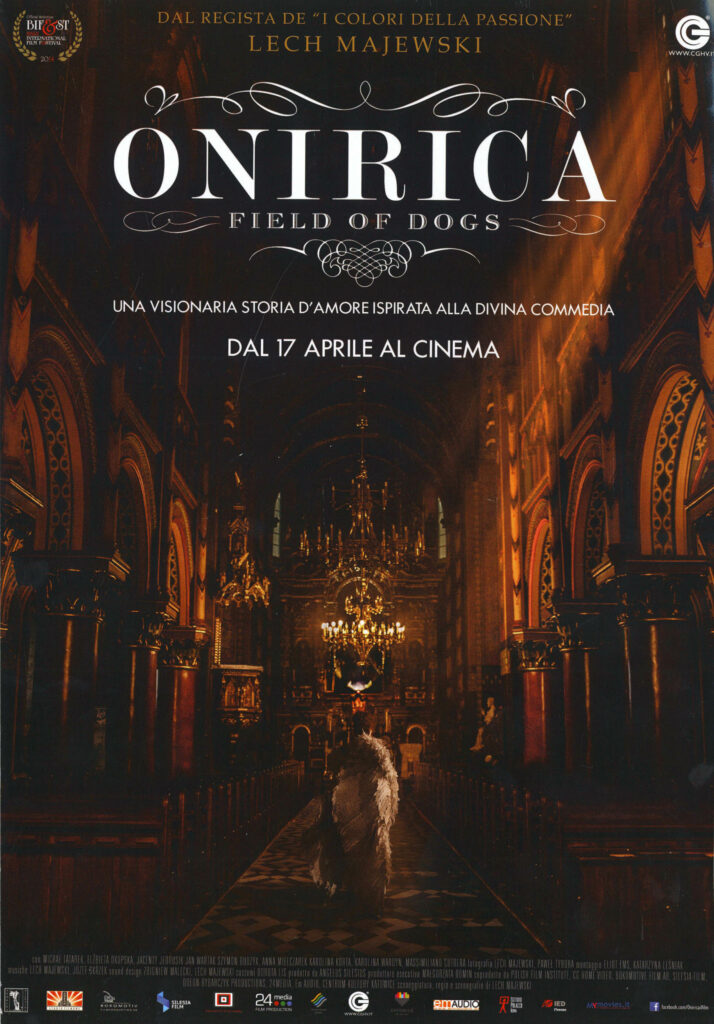