A young poet, whose violent father’s shadow looms over him, recalls traumatic episodes from his life while locked away in an asylum.

A unique cycle of 33 interrelated videoart features, Blood of a Poet, opened Lech Majewski Retrospective at the Museum of Modern Art in New York. Rejecting dialogue and chronology it marked an innovative approach to the traditional film narration. Based on this cycle, Lech Majewski assembled a full lengths feature without words, Glass Lips, telling the story of a young poet at odds with himself and with the world.

After the death of his mother the young poet finds himself shut away in a psychiatric ward. Through the process of remembering, his visions overlap and communicate with one another. Simultaneous flow of images, events and visual associations create a cross-section of a human mind. Entwining into “pungent layers of narrative” (New York Times) they assault the unconscious continually asking the viewer to develop a new method of interpretation. The film includes some shocking images, such as a woman who gives birth to a large rock.

In addition to directing, Majewski is credited as the writer, producer, composer and cinematographer.

“Written and directed by the Polish-American artist Lech Majewski, this haunting look at the nature of nurture uses the childhood memories of a traumatized young poet to explore themes and visuals ranging from the biblical to the baroque. Marshalling paternal abuse and maternal passivity into painterly, dialogue-free scenes of domestic isolation, the filmmaker creates an aesthetic of dysfunction that’s as beautiful as it is disturbing. Originally shown as a gallery installation of 33 video artworks titled Blood of a Poet, Glass Lips contrasts natural sound with unnatural behavior, and meticulously controlled images with emotional anarchy. After a while the film’s expressiveness becomes so hypnotic that it’s difficult not to make your own connections.”
Jeannette Catsoulis, The New York Times

“The hypnotic, painterly images combine with haunting music (composed by Majewski) in one of the most unusual, beautiful films of the year.”
V.A.Musetto, New York Post

“Lech Majewski’s 33-channel video installation Blood of Poet, which had its world premiere at MoMA last May, is un-deconstructed as a 100-minute, relatively linear projection titled Glass Lips. A poet, institutionalized in a mental hospital and possibly catatonic, fingers the shards of his traumatic childhood, particularly the doings of his brutish father and seductive mother. There are no words, nor – given the precision of Majewski’s images and the haunting musical score that he composed – are they necessary.”
Jim Hoberman, The Village Voice

“Lech Majewski uses the memories of a poet in an insane asylum to string together a number of short, disturbing, surreal pieces. Having begun life as an installation piece that premiered at MoMA as part of a major retro of the artist, Majewski’s work is full of stark, wonderful, unsettling images.”
New York Magazine

→ Art BLOOD OF A POET / Screenplays 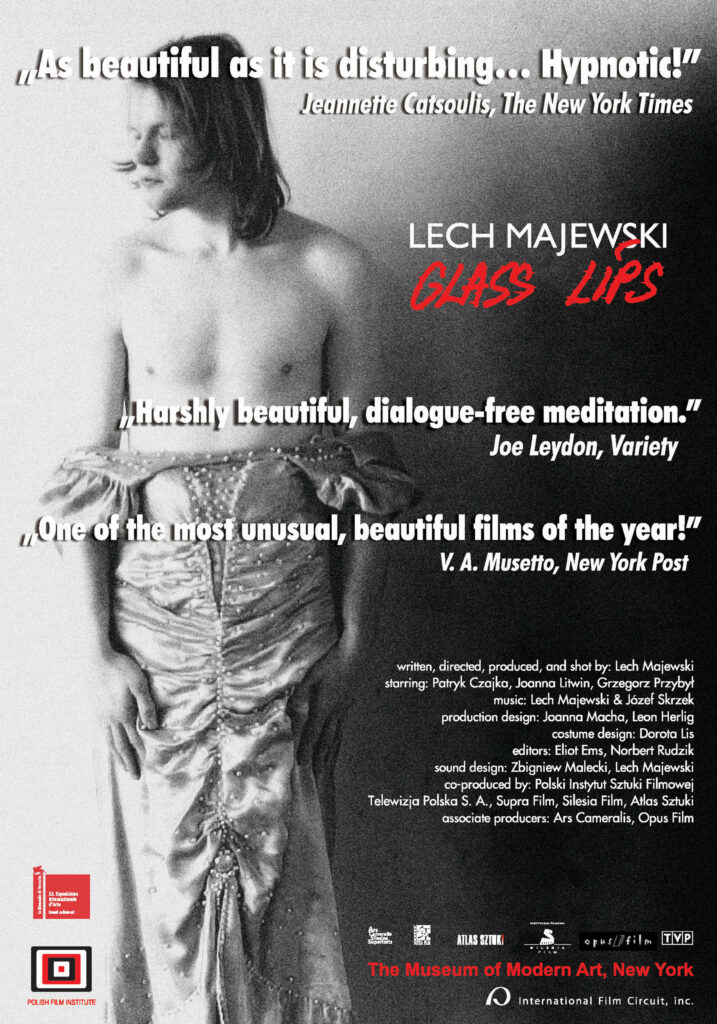